1. What was the most surprising thing about becoming a parent?
That being honest with my kids from the beginning about my own shortcomings, frustrations and admitting mistakes would dissolve walls of confusion, create a connection between us that blew me away (considering their age) and bring forth in them their natural ability to empathize and feel compassion. I realized growing up how many times there was mysterious energy around the truth that was NOT being said and in that space I was led to fill in the gaps myself – usually making it about something I had done. I didn’t want this for my kids. I wanted them to never wonder or manifest a story that doubted their worthiness or value.
2. Tell us about one of your proudest parenting moments.
My son (5 at the time) was acting out in school and his PE teacher (not thinking) told him that he should be “ashamed of himself”. She didn’t realize that the words she heard so often and uses now are heard by children that understand what those emotions mean. At first I was a total Momma Bear and wanted to rip her face off for allowing doubt into my child having him tell me that it means he shouldn’t like himself for what he did.
Being an emotional empowerment coach I had to practice what I preach, so I felt all the feelings I had and let them move through me – anger, sadness, guilt and hurt until I felt clear enough to approach the teacher.
The next day I spoke to her directly only to discover that she saw NO ISSUE with the words she used. I was her wake up call. And I spoke from my heart. My open, raw and vulnerable heart. I went into the fight armourless and shared with her what it was like to hear my sons confusion. For her to know what those words do to people and that I was sorry she experienced them as a child. I told her that she didn’t deserve to hear them either. She was older and felt genuinely confused by the confrontation which I had a deep compassion for. I told her that she needed to apologize to my son for her words.
A few weeks went by and she hadn’t apologized. I heard her mom was ill so I let the time slide a bit as part of me wanted to go right back to her and be angry. But I held out and had faith it would happen.
Sure enough, three weeks later she showed up at his classroom door and called him out into her office (which of course made him think he was in trouble). She sat him down and told him how sorry she was. She told him that she would never use those words again to him or any other child. And he forgave her. The connection between them (and her and I) is palpable.
I was proud that I was able to move through that experience with full vulnerability I not only gave my son a gift learning that he is worthy of an adults apology but that there is strength in admitting your mistakes and that it is never too late to make things right.  I see also that  gave her the opportunity to learn from a five year old boy about how worthy she was of forgiveness.
3. Was it difficult for you to participate in this project? What strength did you pull from to get past the fear and contribute?
Not at all. I found strength in the project itself and to stand with other survivors. Our willingness speaks of the time we live in. NO more hiding. We are worthy and deserve to tell our stories and connect to those who have experienced something similar.
4. Do you believe participating in the project has changed you in any way? If so, how?
Of course. How could it not. I think anytime I step into a place where I am revealing an intimate story, an idea or a piece of my heart it strengthens me and provides a feeling of self love in doing it. Showing up for myself and showing up for others. Nothing feels more purposeful or connecting and I think that’s what we are here to do in life. To be the fullest, most authentic expression of ourselves in the world. The book embodies this from front to back.
5. What is the greatest lesson you have learned from your children?
They show me when I’m not being true to myself. When I’m not behaving in a way that honours my soul or true nature they are out of sorts. They are the angelic button-pushers in my life to show me when I need to surrender to resistance, to slow down, tune in and speak up what I’m experiencing. This usually results in me sitting down on the floor. LOL. That’s when they know it’s time for us to clear the air with the truth, admit how we are feeling and what’s going on for both of us, cry (if we aren’t already..lol) and hug it out so we can move forward feeling more connected than not.
6. When you are not writing or parenting, what do you love to do?
I have taken up painting where I work on a “living canvas” that is just for me to play on. Where it is NEVER done. I just keep painting over it again and again. Taking pictures of images I like along the way but then letting it change again and again. There’s something in there about letting change happen and becoming in better relationship with it. To let go and allow my attachments to things (or images) be less and less. To sit with my intention and be fulfilled by that and inspired to see what else I can create and try.

If Triggers had a slogan it would be… May all that isn’t you, fall away. And in feeling it, you are healed.
So let them serve, liberate and free you on your journey.
The Beautiful Thing About Triggers
Keri-Anne Livingstone
Trigger Points: Childhood Abuse Survivors Experiences of Parenting

Bio:
After an epic journey of “unsolicited” change, Keri-Anne transformed her disconnected and robotic life from existing to LIVING by pursuing one unconventional concept – DARING TO SUCK.
By daring to tune in and speak up for her desires, she transcended the bullshit (roles, rules, expectations) in her life,  reconnected to her heart, put both hands back on the wheel and came ALIVE again. She demonstrates the power of living an authentic, open-hearted life and the limitless impact it has on the world.
She serves the world as an Empowerment Coach, Impassioned Speaker and “Edu-tainer” facilitating and inspiring re-connection, healing, self acceptance and authentic liberation for those seeking freedom and full expression in their life and business. The ripple effect is real and Keri-Anne is here to help you make waves!
Website: www.KeriAnneLivingstone.com
Facebook: https://www.facebook.com/daringtosuck
Facebook Group: https://www.facebook.com/groups/EmpatheticBadasses/
Twitter: https://twitter.com/DaringtoSuck
Instagram: https://instagram.com/daringtosuck/ 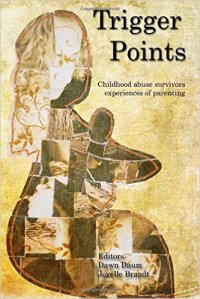 The Trigger Points Anthology is now available for Kindle and paperback. Click the link to get your copy today!!

Become a member of the supportive Trigger Points community on Facebook and Twitter to connect with other parenting survivors.