After Laura’s article He Wrote It Down, the story of Laura and her cousin’s plan to dance on their shared abuser’s grave went viral, they quickly realized the healing power of permitting others to tell their story. …and Say It, Survivor was born.

Laura and Mary are committed to using their experiences as survivors and writers to facilitate people telling their stories as a way to empower and heal themselves through workshops, public speaking and offering a safe space for survivors to anonymously share their story.

Today, Laura shares with us the path that led to the creation of Say It, Survivor. Be sure to check out their upcoming events!

I can’t say exactly when my abuse began.

Most abuse is insidious. It’s like the lobster in the pot. You just turn the heat up bit by bit, tiny increments- and before the lobster knows what’s happening it’s being boiled alive.

I know it didn’t begin where it ended, violently, on a cold, linoleum utility room floor- a dish of wet cat food near my head, the smell overwhelming

It’s funny, the things I remember.

I’m sure it did not start with an overtly sexual act. I’m sure it was with little boundary violations. I remember being held in a lap while I squirmed, trying to leave. That forced affection my first indication that my “no” was not enforceable. I remember being barged in on in the bathroom and pool cabana, again and again.

I don’t remember much about life before my abuse. I don’t remember who I was, really. I’ve heard accounts. I can piece together a composite of the little girl I was. My nickname was Leave-me-lone Laura.

I told, eventually. My mother believed me, my father did not.

My cousin Mary had been abused as well. After I disclosed, Mary heard I’d told and tried to tell the adults in her life that she too was being abused. Her cries for help fell on deaf ears. She endured years more abuse. I did not.

Mary and I did not see one another again except for at our grandmother’s funeral. No one talked to me. Not my aunts, not my uncles, not my godfather. My grandfather gave me wide berth. It was as though I was invisible. A ghost. But I remember locking eyes with Mary. She’s the only one who looked at me. It was a knowing look.

That made sense, actually. I always knew Mary had been abused.  She’d tried to warn me, but I was too young to understand what she was talking about.

I think I laughed, actually.

When I think back and realize that in that moment at the funeral she was still in it, that she was still being harmed, it breaks my heart.

We would not see one another again for thirty-five years. We went from being very close, to being cleaved from one another. It felt like a punishment for telling.

The Thanksgiving before last, I awoke to find a Facebook friend request from Mary. I hesitated to accept at first, not knowing what she’d been told, what she remembered. I decided that worst-case scenario I could un-friend her and be no worse for the wear.

Shortly thereafter, I found myself on the phone with my cousin. The decades disappeared. We began to catch up on each other’s lives.  The parallels were staggering. Same sense of humor, similar interests and talents. Same self-destructive behaviors.

At a certain point, Mary expressed confusion. She said, “I know your parents got divorced, but I don’t understand why we never saw each other again.” I was afraid to rock the boat- afraid to lose her again, so I hesitated. Then Mary said, “Let’s talk about the elephant in the room.”

And so we told each other our stories. 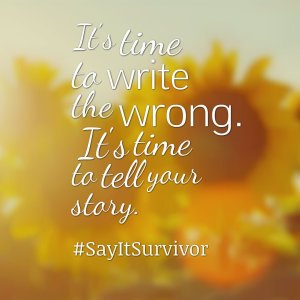 Two months later, we reconnected in person. We stayed up all night talking, looking at photos, filling in the missing pieces- trying to make sense of things. Laughing. Crying.

The next day we set out to dance on our grandfather’s grave. We got lost on the way to the cemetery and pulled into a police station to ask for directions. On a whim, we decided to report him, though he’d long been deceased.

The officer assigned to us, Officer Paul, treated us with such kindness, and such dignity. He led us through our story and filled out a formal report. He investigated and found another victim of my grandfather’s outside of the family. We met with her mother the following day.

I wrote about the experience, published it on my blog, and the post went viral. Overnight, I began to get inundated with people telling me their stories. People saying, “Me too.” Many strangers, yes- but also people I knew well. Women and men whose stories I’d have said I knew. It quickly became apparent that this was no longer just our story. It was bigger than that. We became determined to do something with the experience, to give our pain a purpose.

Bio:  Laura Parrott-Perry is the single mother of two amazing children and is devoted to a very handsome dog, indeed. She is the author of the popular blogs, In Others’ Words, and The Golden Repair on DivorcedMoms.com.  Her work has been featured on Huffington Post and in Boston Magazine.

She is also a survivor of sexual abuse.  And she’s talking about it.  Shamelessly.

Connect with Say it, Survivor: